Jacques Forestier is competing in the Menuhin Competition in April 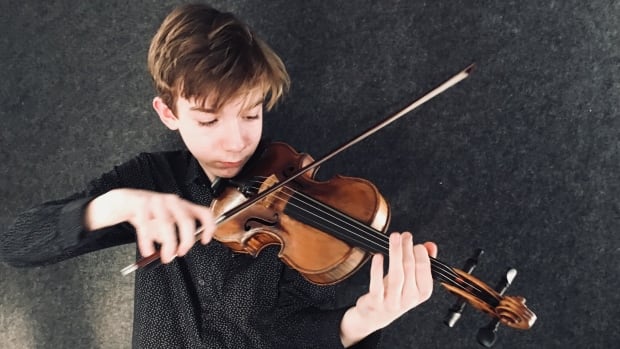 He practices more than 30 hours a week, received a standing ovation at Carnegie Hall and is now preparing for the Menuhin Competition — known as the Olympics of music competitions for young violinists.

Not bad for a 13 year old. Jacques Forestier says his love for the instrument started at the tender age of two.

“I would watch my mother perform at concerts and she thought I hated music because I was always screaming and crying but it was actually because I was so in love with it — as soon as I started [lessons], I wouldn’t stop,” Forestier told the Homestretch.

Forestier travels to Calgary from his home in Edmonton every week to attend the Mount Royal Conservatory, where he is taught by renowned instructor Bill van der Sloot.

“The level of students and the teachers that they bring in, the guest musicians to give master classes, is just second to none,” says Forestier.

Teenage violinist to play ‘the Olympics’ of music competitions

Like many toddlers, Jacques Forestier would make a fuss when his musician parents toted him along to concerts.

Unlike many toddlers, his unhappiness stemmed from being left out of the fun — he wanted to play instruments, too, his mother theorized.

She handed her two-year-old a violin. Jacques hasn’t put it down since.

Now 13, Jacques is the only Canadian to qualify for the prestigious 2018 Menuhin Violin Competition, to be held in Geneva come April.

“I’m thrilled to be going to the wonderful city of Geneva, in Switzerland, and it’s an honour to be representing my country there,” the Edmonton teen said Monday morning as his mother, Marie Forestier, drove him to Mount Royal University in Calgary for his weekly lesson at the Conservatory Academy for Gifted Youth.

The global competition is “like the Olympics for violin,” Jacques said.

Established by violinist Yehudi Menuhin in 1983, the competition is open to musicians under the age of 22. Held every other year, the 2018 event received entries from 317 youths across the globe, including the only 44 who were selected to perform. The youngest competitor is 10 years old.

Winning a prize at Menuhin is a gateway to a career, the teenager said. It leads to a United Kingdom tour, concert invitations, master classes and potential recording deals.

If Jacques appears familiar, you may have spotted him around town performing at the Kiwanis music festival, or the downtown farmers’ market, or possibly on television, competing in Canada’s Got Talent when he was just seven.

At age nine, he dabbled in the theatre, playing the role of Michael Brown in the Citadel’s production of Mary Poppins. A year later, the 10-year-old fulfilled many a musicians’ dream when he played violin at New York’s Carnegie Hall after placing second in his category at the American Protege International Competition.

“I believe that to do well in life, you really have to work hard from the start,” he said.

At the Menuhin, he’ll play Bach’s Sonata No. 3, Wieniawski’s Etude-Caprice, Romance, Opus 26 by Svendsen, and improvise based on a short tune the judges will provide.

It’s a lot of pressure, he acknowledged, but he reasoned the hurdle is purely psychological.

“I’ve just got to keep my confidence, practise hard, and that’s all I can do,” he said.

The junior competition at Menuhin, for children under 16, takes place April 13-14.

A WINSPEAR STANDING OVATION for Jack, his parents and grandmother … 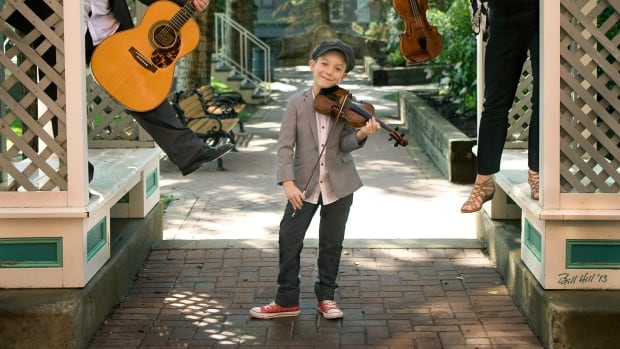 The only time success comes before work is in a dictionary,’ says 10-year-old virtuoso

“The only time success comes before work is in a dictionary,” said 10-year-old Jack Forestier without a hint of irony.

The adage is an important one for the pint-sized virtuoso violinist from Edmonton, who joined the ranks of Judy Garland, Duke Ellington and Sergei Rachmaninoff this weekend when he performed on stage at New York’s Carnegie Hall.

“I work very hard — like two and a half hours a day except for my day off, Saturday, which is a relief,” said Forestier, who has played since he was two. “Nobody likes practicing, but most people love performing.”

And Forestier is no stranger to performing.

At the age of seven, he competed on Canada’s Got Talent, playing alongside his band member and father Michael Forestier. The pair also often performs as a trio, joined by Forestier’s mother and violin teacher Marie Forestier.

“I just love the sound of the violin,” he said. “When I was at a concert with my mother I would always want to just listen and I would always scream so she started me on the violin and I just adored it.”

But for Forestier, nothing could compare with Carnegie Hall.

Admittedly, he was a little nervous before hand, “but as soon as my bow touched that string, those nerves went.” 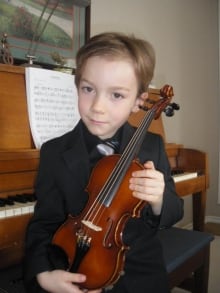 “It was fabulous,” he gushed. “I loved it. I had such a great time, I was so honoured to be performing with such great performances. I played so well and I even got a standing ovation.”

Forestier was among a handful of five- to nine-year-olds who auditioned for the American Protégé International Competition of Romantic Music in February 2014.

He eventually placed second, earning his chance to play in the Weill Recital Hall at Carnegie Hall.

“I was so excited, I’ve been counting the days since February,” he said.

When he’s not practising or performing, Forestier likes to ski, sing, and says “I love haute cuisine” — a passion he fed with escargot the night after his New York show.

As for his future plans, Forestier said he would like to play Carnegie Hall again, tour the world, live in Europe and “spread the joy of music to everybody.”

EDMONTON – The venue is every musician’s secret dream: New York’s Carnegie Hall. A multi-talented young Edmonton violinist has won the chance to perform there in March.

Jack Forestier has just turned 10. His second-place finish in his age group (five to 10 years old) in the “romantic music” category of The American Protégé International Competition is the reason he’ll appear onstage at the Weill Recital Hall in Carnegie Hall, in a recital that features the top three in every age group and musical category. The Protégé Competition, which attracts musicians from around the world, had a record number of applicants this past year.

Jack, who was a semifinalist in the 2012 Canada’s Got Talent competition, has been playing the violin since he was two. His mother Marie is a violinist and music coach. For the Protégé Competition, his chosen piece, submitted to the jury in a YouTube video, was Manuel de Falla’s Danse Espagnol.

“He had the time of his life,” says his mother of the 97-performance two-city run of the Broadway musical. And he won the 2014 Calgary Critics’ award, the “Critter,” as featured actor in a musical.

WATCH ABOVE: A 10-year-old Edmonton violinist is set to perform at Carnegie Hall this weekend. It’s an opportunity he won after facing off against stiff competition from around the world. Shallima Maharaj has his story.

EDMONTON — A young Edmonton musician is about to embark on a journey many musicians can only dream of. Jack Forestier, 10, will play Carnegie Hall this weekend in New York City.

Coming from a family of musicians, the musical prodigy picked up his first violin at age two and has “loved it ever since.”

“It causes fireworks in my brain whenever I play, and there’s so many different themes like slow, quick, andante, allegro. It just goes all over the place, the music,” he explained.

Jack has played in several cities across Canada in his young life, but has had his sights set on the Big Apple since he was about four years old, his mother said.

“I never know where Jack’s going to take us and what we’re going to be doing next,” said Marie Forestier, a music instructor at MacEwan University who also started playing violin at age two.

Last year, while playing Michael Banks in the Citadel Theatre and Calgary Theatre’s co-production of Mary Poppins, Jack wanted to make his dream a reality. After a bit of online research, he entered the American Protégé International Competition, which encourages young musicians to realize their dreams.

This past October – Tuesday, Oct. 28 at 8:04 a.m. to be exact – Jack received the exciting news; he came in second place in his age category and would be playing Carnegie Hall.

“I didn’t think it could get any better from Mary Poppins and it’s now gotten a million times as good as Mary Poppins,” exclaimed the young man.

His parents are just as excited and proud.

“It’s amazing and it’s exciting and I can hardly believe it,” said Marie, who describes her son as a unique little ball of energy. “Jack does not take no for an answer … he is so determined.

“It’s so exciting to see his passion unfold and all his dreams come true,”

The Forestiers leave for NYC on Thursday. Jack has a rehearsal at Carnegie Hall on Friday in preparation for the big performance Saturday. Part of winning the competition means Jack will also get a lesson at Juilliard.

And while the experience is a dream come true, Jack’s dreams don’t stop in NYC; he has aspirations of sharing his music with the world as a concert violinist.

“I just want to touch many people’s hearts. And for myself, I want to tour the world and live in Europe.”

Jack won the Calgary theater critics award for best featured actor in a musical for his role in Mary Poppins last year. He was also a semi-finalist on Canada’s Got Talent when he was seven. 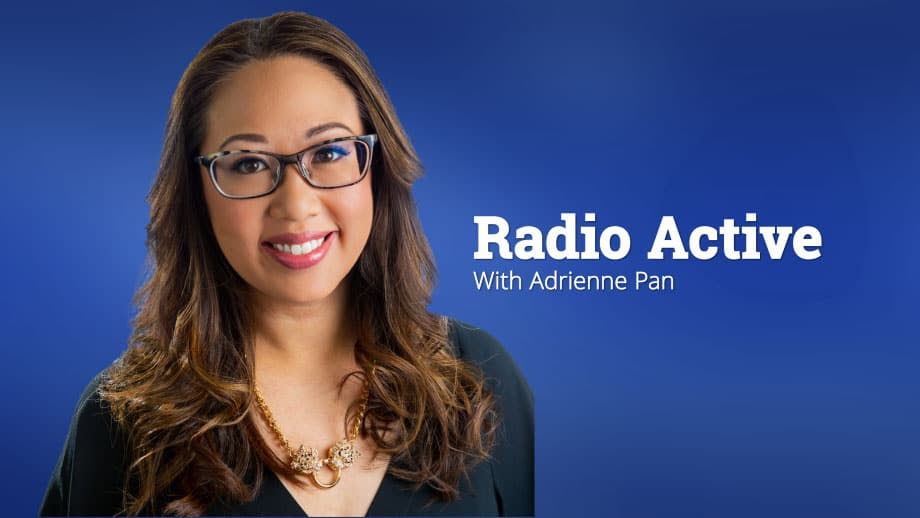